Excel - VBA course
This free course by Stelling Consulting teaches you how to program in MS Excel VBA. It goes far beyond being able to adjust a macro a bit. Some programming expercience will make it easier to follow this challenging course.

Part I is more generic and theoretical


Part II is specifically about VBA in combination with Excel

Course goal After completing this course you are able to create VBA procedures in MS Excel.

VBA can be used to


Always use Excel standard functionality to the maximum extent possible and try to limit the amount of VBA code (within reasonable bounds).

We will learn to write VBA code. That code must be executed. Code execution is normally triggered by pressing a button. So, we will create a command button first. Below you see the final result of this exercise.

Make the Developer ribbon visible, if it is not visible yet. Go to menu File → Options → Customize ribbon. Check Developer in the right screen.

Go to the Developer ribbon → Insert → Command button, in the upper left corner of section ActiveX-controls.

While pressing the mouse left button, draw a rectangle in your worksheet, then release the mouse button. 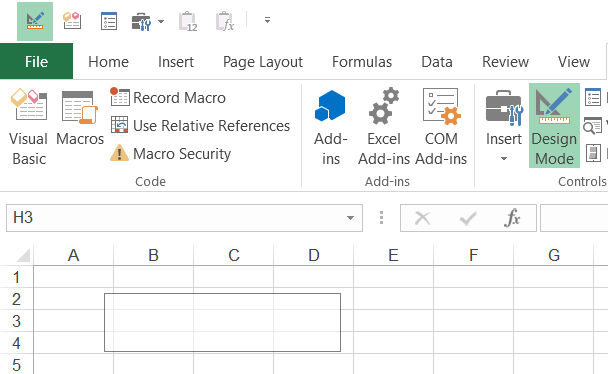 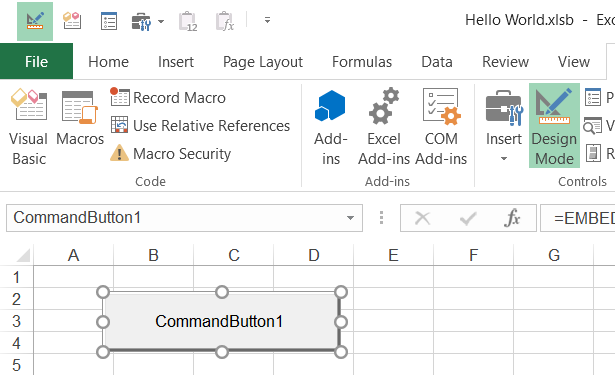 Give the command button a logical Name (the link to VBA code) and Caption (text on the button). This is done in the properties screen, via right mouse click on the command button. Use some capitals in Name and start the name with
cmd
. Some naming conventions: command buttons start with
cmd
, option buttons with
opt
, check boxes with
chk
, etc. 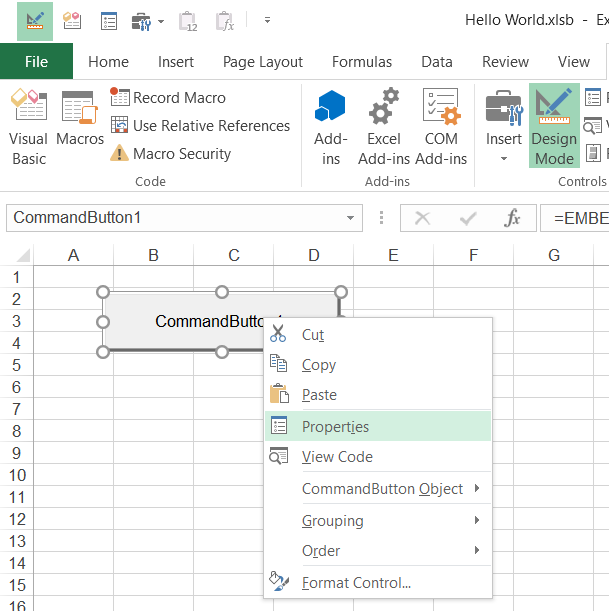 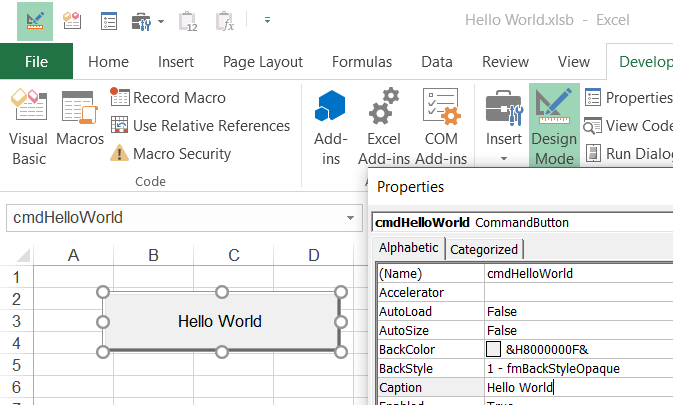 Double click (left) on the command button to jump into the VBA programming environment (or via ALT-F11). Notice that the 'header and footer of the command button' have been generated automatically. You will recognize the button name and you can tell it is a procedure (Sub) to be executed after a mouse click (_Click).

Enter the follwing code: MsgBox "Hello world. Continue?", vbYesNo, "Continue?". Notice that if you type the comma, a popup list appears with user message options (that can be combined with +). vbYesNo is often used. It creates a Yes and No button on the user message popup screen.

Close the VBA mode (press x at the top right), and exit the Design mode. 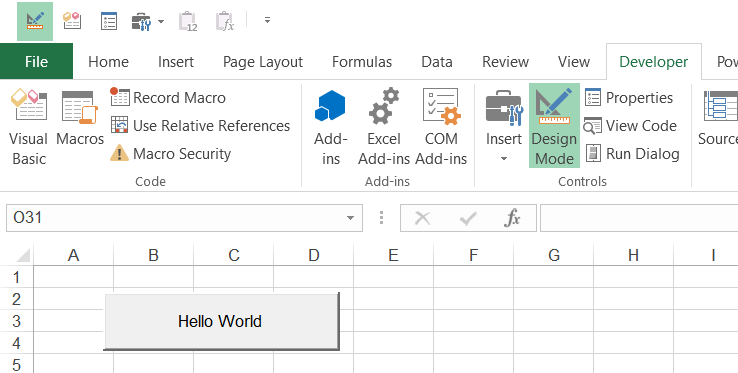 Press your command button. If the 'Hello World' user message appears, then you have earned your first study points.
Save your file as *.xlsm or as *.xlsb file!

A user message is often used to inform a user a procedure has finished. Below an example of another, often used, type of message: if the user choses no, then the procedure is not executed. This construct will be used in a later exercise. 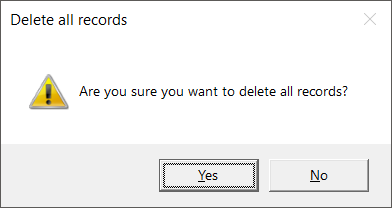 A Sub procedure performs a task, a Function procedure also gives an output value. The syntax of both is similar. Both use input variables and local variables (temporary memory within a procedure).


Tip: Using some capitals in procedure and variable names prevents typing errors. If you type in the name somewhere else in your code - without capitals - it will automatically change into the name including capitals. If not, then you know you made a typing error.

Variables are input and local memory of procedures. The word
Dim
meane 'create'. Shown below is a function that sums two integers.


Give variables logical names and declarere their type explicitly.


Intermezzo: go to the VBA environment (via ALT-F11), menu Extra → Options, and check Require Variable Declaration. Line
Option Explicit
will be set automatically each time you create a new file. Each variable has now to be declared explicitly. This reduces the risk of errors. 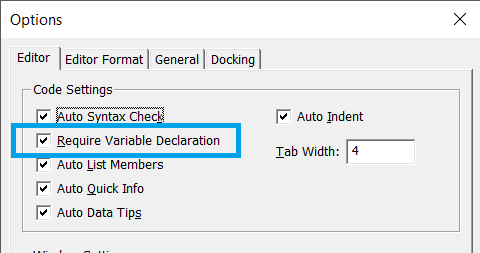 An array variable can be regarded as a list or multidimensional table. Shown below is an example of how to create a table with 100 random numbers. Each element is controlled via its index, here named
iNumber
. Standard VBA function
Rnd()
draws a random fractional number between 0 and 1.

An example of a 2-dimensional table with 3 sets of 100 random numbers.


Dim RandomNumber(1 to 3, 1 to 100) as Single
Dim iSet as Integer, iNumber as Integer
For iSet = 1 to 3
For iNumber = 1 to 100
RandomNumber(iSet, iNumber)= Rnd()
Next iNumber
Next iSet
RandomNumber(100) in fact contains 101 elements, because 0 is the first index (like in most programming languages). If you want to start index with 1, then add the following at the top of your code
Option Explicit
Option Base 1


Alternative method is to declare the lowerbound of the array explicitly
as Dim RandomNumber(1 to 100) as Single
You can make array variables grow dynamically, if their size is unknown upfront. Then do not specify dimensions when declaring the array variable:

Suppose you have the first number to be stored:

Use
Preserve
if you want to keep values when redimensioning:

In above Else If-construction you can use variables of different types. In below Select Case-alternative you cannot.

Use
And
and
Or
and
( )
to combine multiple conditions.


Use
Not
to create the opposite condition.


Unconditional loops - For Next


A loop executes the same instructions multiple times. Use For Next if it is known upfront how many times instructions should be executed, for example 10 times.

If the step counter should not increase with 1 (default), then specificy step size (note that you can also make it decrease)

Conditional loops - Do While Loop / Do Until Loop

A loop executes the same instructions several times. Use Do While or Do Until if it is unknown upfront how many times the instructions should be executed.

Though code-technically less beautiful (regarded sloppy), it can be handy to use
exit
to exit loops and procedures immediately.

This exercise contains many elements of the previous topics and is meant as an integral exercise. Having an instructor for guidance is handy.

Follow the instructions and step-by-step approach strictly. Also review the code examples given in previous sections. First, read all steps to get an idea of the approach, then start with step 1. Do not try to create shortcuts and skip a step. Resulting code may not be the most efficient, but that is not the goal of this exercise.

If your program does not work correctly at some time - which is likely to happen - then you will have to debug (= detect and remove code errors). Therefore, read the following section about debugging as well.

The program code after each step can be found at the end of this page. Trying yourself first, you will learn/experience the most!

Reading and writing to a worksheet

If you move the complete table,
the code will give a wrong answer
so avoid direct cell reference! 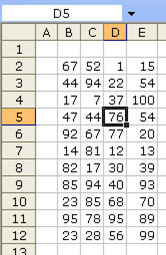 Cell reference via range name (cell with name)✓
Reference to the cell with a name
X = Range("UpperLeft").Value
→ X becomes 67.

Reference to another cell via the cell with a name

If you move the complete table, the code will still give the correct answer,
as long as range name upperLeft and Table refer to the correct range. 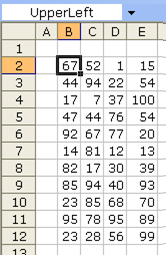 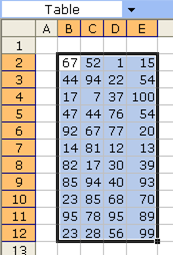 Writing to a worksheet works the other way round, so for example

In case of multiple worksheets, specify the sheetname
Sheets("Sheet1").Range("UpperLeft").Value = X

Create a single line program that reads values of two input cells named InOne en InTwo and writes the sum of both values to a cell named OUT after pressing a command button Sum. 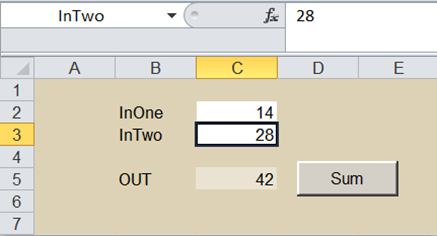 
Revisit the prime number generator. Write prime numbers to the worksheet during execution. Do this in such a way the user can drag and drop the numbers somewhere else, so next time you execute the program the generated numbers will start appearing there. 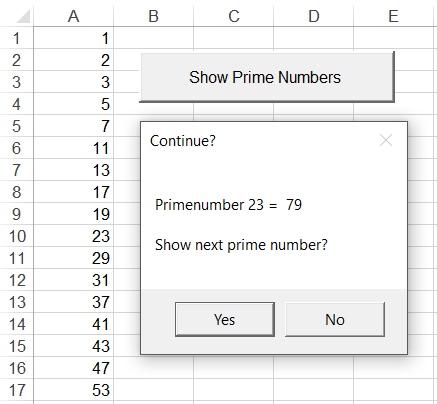 Resizing a selected range is done by
Range("A1").Resize(number_of_rows,number_of_columns)


Method I uses a row and column counter to loop through all cells in a range; this gives control over the order. Method II is leaner.

Go to the VBA editor. If you do not see the explorer at the left, go to menu View → Project explorer (or press CTRL+R).

VBA code can be found at different places: 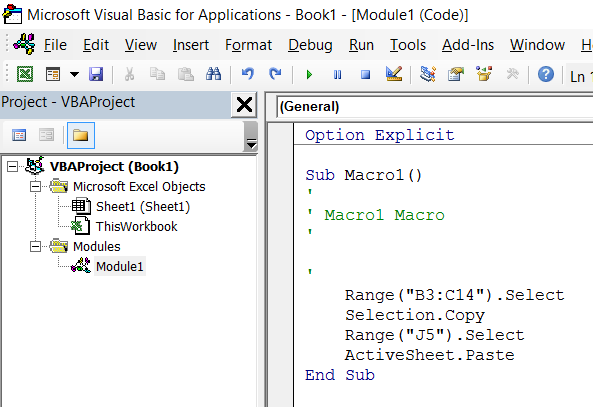 If you do not know how to convert a manual procedure into VBA code, it is handy to record a macro (Excel knows too many methods/object/properties to learn them all by heart). All manual tasks performed during the macro recording are automatically written into a sub procedure within a module. You can study that code afterwards or adjust it to your needs. 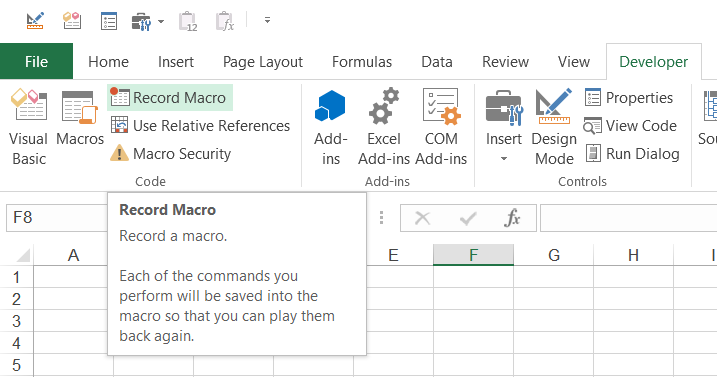 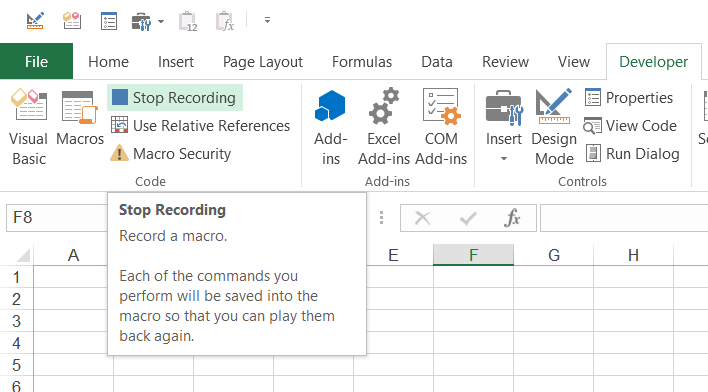 If you only want to copy data without format and no filters are ever active, you can do the following:
Range("J5:J16").value2=Range("B3:C14").value2

This works faster and has as additional advantage that it bypasses the clipboard, so it uses less RAM.

You can create your own Excel function as a
Public Function
in a module. Add modules via VBA-editor menu Insert. Apart from sitting in a module, the functions themselves are identical to other VBA function procedures. 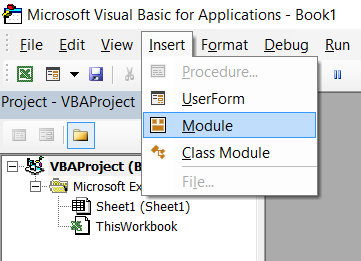 The example above is a function that calculates the as-the-crow-files-distance between two geographical locations.
On this website there is also an extensive example (including downloadable file) of a user defined function that interpolates within a 2-dimenional tableinterpolateXY example

Create a table with fields: Number, X, Y. Create 10 random locations. Create two input cells above the table: X and Y. Create a function that gives the number of the location closest to X,Y as a result.

Besides command buttons you will often see option buttons and check boxes in user interfaces. 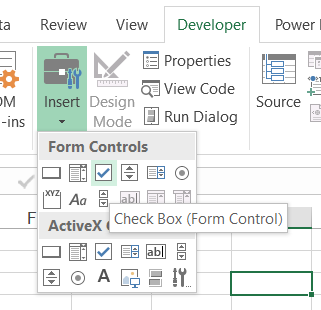 They come in two 'flavors': Forms en ActiveX. Nevertheless we recommend using Forms, because ActiveX controls do not work on Apple computers and they often malfunction when your computer is connected to a beamer (causing your demo to fail).

How to convert an ActiveX button into a Forms button

Create a button that gives a user message with the value of the option button and selection box.

You can use
GoTo
to 'jump' to another place within the code, skipping part of the code. This is often combined with
On Error
(and
Exit Sub
) to program specific error handling routines. 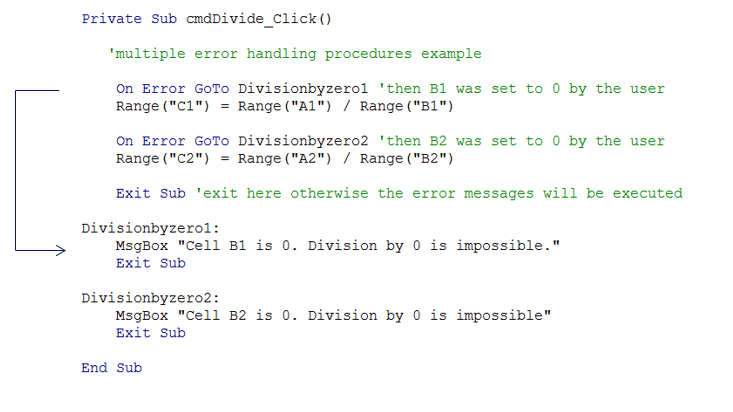 
Activate autofilter of a table

Deactivating autofilters is necessar if you want to copy-paste all data.


Deactivate autofilter of current worksheet. Note: this does not deactivate filters from tables on the sheet!


Deactivate autofilter of a specific table on current worksheet


Remove autofilter (if existing) of a named sheet

Reading from files & writing to files

Read from another MS Excel file

You can create variables as constants.

You can define your own variable types, for example if data belongs together:


Longer version, more 'by the book' with regard to the Do While condition

Including a more elaborated user message.